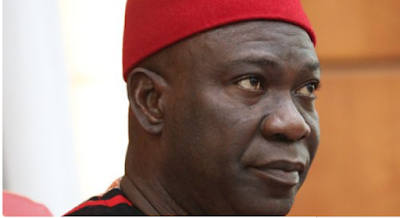 A letter that accompanied the visa application of an alleged homeless child showed Senator Ike Ekweremadu informed the UK authorities that he was taking the person abroad for a kidney transplant for his daughter.

The document seen by NigerianEye showed Mr Ekweremadu applied for visa for David Ukpo on December 28, 2021.

“I am writing in support of the visa application made by Mr Ukpo Nwamini David who is currently having medical investigations for a kidney donation to Ms Sonia Ekweremadu.

“David and Sonia will be at the Royal Free Hospital London, and I will be providing the necessary funding. I have enclosed a statement of my bank account,” the letter said. 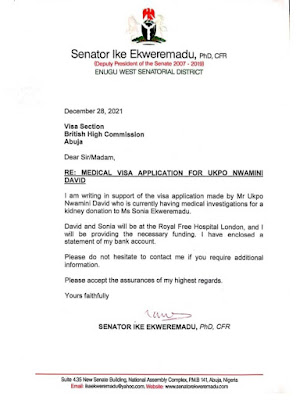 Mr Ekweremadu was arrested on June 23 over charges he tried to smuggle in a child to the UK for organ harvesting.

The Nigerian senator appeared in court on Thursday afternoon in London and was denied bail. His wife Beatrice is also standing trial for the same charges.