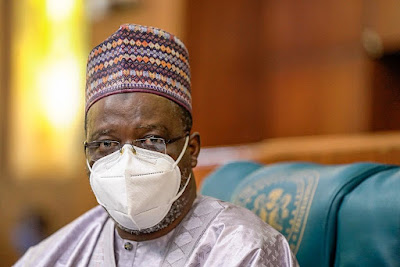 Idris Wase, deputy speaker of the House of Representatives, says security agencies rarely act upon the resolutions of the lower parliament.

Wase spoke on the floor of the green chamber during plenary session on Wednesday.

The deputy speaker, a legislator representing representing Wase federal constituency of Plateau state, was contributing to a motion sponsored by Solomon Maren on the “urgent need” to rescue Aminu Derwan, the district head of Panyam, Mantu LGA of Plateau.

Recall how gunmen, said to be about 20 in number, invaded the monarch’s palace and whisked him away on Sunday.

Speaking on the abduction, Wase said most of the attacks on the state and elsewhere would be prevented if security agencies implement the security resolutions of the house.

“When Solomon Maren came to me with this motion, I told him that what is happening in his constituency compared to my own is a child’s play,” Wase said.

“Today, the people in my constituency are looking for refuge. The villages that have now been sacked are quite very large in number. I have presented three motions on this matter. In my constituency, hardly will two days pass without someone being kidnapped and taking ransom from villagers — ransom not less than N10 million.

“I have lost about five persons. They will take the ransom and still kill the person. At times, these things take place in places where you have security unit.

“About three days ago, we lost about 1,000 cows. They rustled the cows and the villagers are now left to pursue these bandits.

“I had to pay personal visits. Despite the resolutions of the house urging the security agencies to put out formations in some of these areas so that we will be able to stop these things, till this moment, nothing has happened.

“It is like our resolutions are mere statements. If they are taking us seriously, I believe many of these things can be stopped.”

While moving his motion, Maren Mango, lawmaker representing Bokkos federal constituency, spoke on several abductions in Plateau, adding that while some victims were killed, others paid “huge ransom”.

“The bandits have taken their dastardly acts to highways, villages and even cities including some parts of the federal capital territory,” he said.

“The spate of kidnappings, abductions and attacks has been systematic, well-coordinated and targeted across the constituency, the state and indeed the country which is alarming and of grave concern.

“Bandits are usually having a field day in carrying out and in perpetrating their heinous activities without any form of resistance, challenge or confrontation from security agents.”

According to the lawmaker, nothing has been heard of “any serious or deliberate actions taken to curb, forestall or even arrest and prosecute these hoodlums”.

He added that if nothing is done to “urgently” prevent the abductions, “our communities may soon be thrown into total terror, fear and or lawlessness”.

The motion was adopted when it was put to a voice vote by Femi Gbajabiamila, the speaker of the house.

Following that, the lower legislative chamber resolved to invite the inspector-general of police and the chief of army staff with a view to investigating the matter.

The lawmakers also asked state governments to provide arms to vigilantes, but ensure that they are registered with the office of the national security adviser.