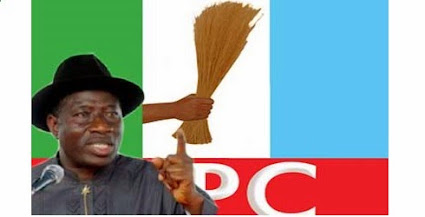 A group of protesters have stormed the national secretariat of the All Progressives Congress, APC, in Abuja on Friday, demanding that former President Goodluck Jonathan should be the ruling party’s presidential flag bearer in 2023 election.

The protesters were seen displaying banners with the pictures of the ex-president as seen in photos tweeted by one Mr Jamoojazzy @OfficialWazobia.

It can be recalled that John Odigie-Oyegun led APC’s Presidential Screening Committee has disqualified 10 of the 23 presidential aspirants of the party.

Although it was not immediately possible to get the list of those affected, the committee at the National Secretariat of the party has finally submitted its report to the Senator Abdullahi Adamu-led National Working Committee NWC.

It was also reported last month that a Fulani group purchased APC nomination form for Jonathan to contest under the platform of APC, and he was absent during the primary election of the Peoples Democratic Party, PDP, held at the Moshood Abiola Stadium in Abuja where former Vice President Atiku Abubakar emerged as PDP’s presidential candidate.

While it has not been confirmed whether the former President has been disqualified by APC screening panel, the protesters want him back to occupy the most coveted political position in the country.