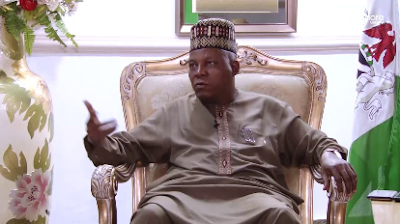 Former Borno State Governor, Senator Kashim Shettima said some Southerners he described as the biblical Judas Iscariot are working against power shift to the Southern part of Nigeria in 2023.

Many have argued that the next president after the incumbent Muhammadu Buhari from the north must come from the South.

However, with the emergence of Vice President Atiku as the presidential candidate of the Peoples Democratic Party (PDP), some members of the All Progressives Congress (APC) have also suggested that giving the APC ticket to a northerner was the only way to defeat the PDP in 2023.

Shettima, while on a visit with a presidential aspirant, Bola Tinubu, to Ogun State, expressed concern that some Judas Iscariots from the South were “hellbent on becoming spoilers” to scuttle the chances of the South to produce the next president.

Speaking in Abeokuta, Ogun State capital, Shettima maintained that the enemy of Southern Nigeria is often not the Northern Nigeria but men and women of its own stock, the Judas Iscariot of the Southern race who are ever ready to play the second fiddle.

The Senator said some presidential aspirants from Ogun could not garner more than 10 votes at the APC presidential primary election, stating that such aspirants would end up becoming spoilers.

His words: “The enemy of Southern Nigeria is often not the Northern Nigeria, but men and women of its own stock, the Judas Iscariot of the Southern race who are ever ready to play the second fiddle.

“We are living in very interesting times and for those of us in the Asiwaju team, we are moved by the forest of ideas and the realization that what this country needs is a unifying leader who has neither ethnic nor religious agenda and who is not bound by toxic regional solidarity and yet known for exemplary qualitative leadership and if you look around, the contenders and the pretenders for the Presidency of this country, there is no one that the cap fits better than the gentleman seated here.

“In our current dispensation, the dynamics have changed, there is no politician in the APC with the brand name, first name recognition, the track record, the passion for excellence that can stand toe-to-toe and even overshadow Atiku Abubakar better than Asiwaju Bola Ahmed Tinubu.

“He was viciously witch-hunted, harassed and intimidated by the PDP controlled Federal government and that was the time he laid the foundation for modern Lagos.

“So I call on you in the spirit of oneness and for the collective interest of the SouthWest who supported us when we needed him, that support intervenes on your sons who are hell-bent on becoming spoilers. It is better and more honourable.

“Ogun, you are presenting four presidential candidates and you and I know that some cannot get more than ten votes, but they are going to be spoilers, but I can assure you that on his (Tinubu’s) mandate we are going to stand.”