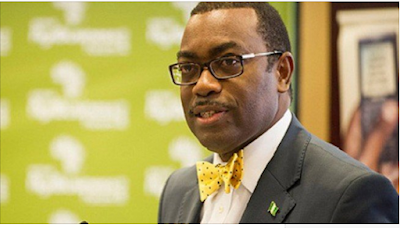 The expression of interest and presidential nomination forms of Akinwumi Adesina, president of the African Development Bank (AfDB), has reportedly been submitted to the All Progressives Congress (APC).

NE could not immediately ascertain if Adesina submitted the form himself or if it was done on his behalf, as his aides failed to respond to enquiries on the matter.

Adesina is expected to contest the ruling party’s ticket with the likes of Vice-President Yemi Osinbajo and Bola Tinubu, a former governor of Lagos.

Delegates of the ruling party are expected to pick a presidential candidate between May 30 and June 1.

Bashir Ahmad, a presidential spokesman, confirmed that the AfDB president has submitted his forms.

Last week, a coalition made up of 28 groups bought the form for Adesina worth N100 million.

Ademola Babatunde, one of the leaders of the coalition, said they put their resources together to purchase the form because APC’s fees are “outrageous”.

“We are 28 groups precisely that came together after a very serious consultation, deliberations on the way forward for a better and united Nigeria,” Babatunde had said.

“We unanimously decided that though the money is outrageous, if we truly want a better future for ourselves and our children and our land of birth and soil of origin, we must put our resources together to obtain the forms for Dr Akinwumi Adesina.”

However, there are reports that he may not appear for the screening slated for today.