Microsoft has announced a new Sound Recorder app for users in the Dev Channel of the Windows 11 Insider Preview Program. It replaces the Voice Recorder app, and brings a revamped design with more options.

For comparison, here is what the current version of Voice Recorder looks like. 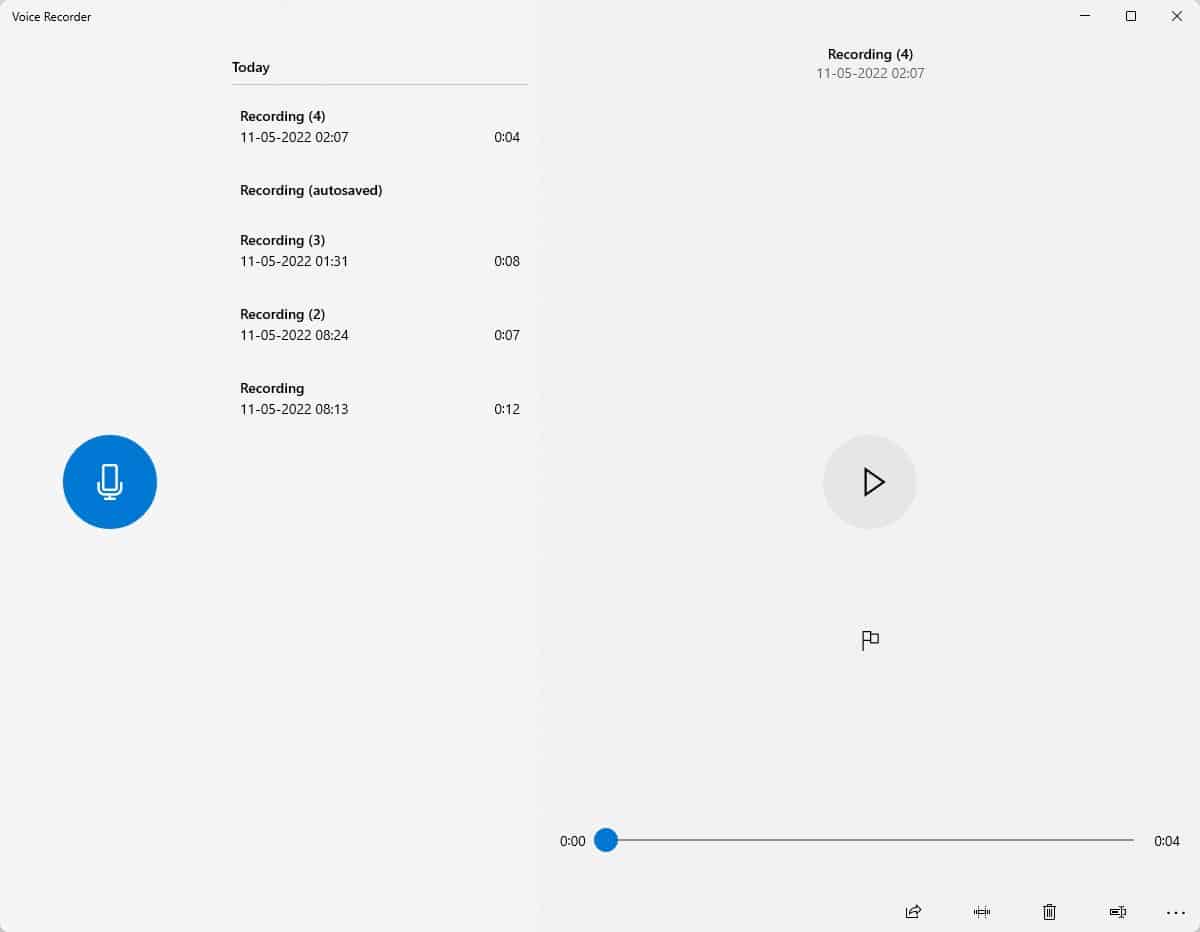 Sound Recorder moves the “Start Recording” button from the left-hand side of the screen to the bottom. The app has the Preview tag on the title bar to indicate it is still in an early phase.

Sound Recorder’s interface has a timeline to indicate the duration that the app has been recording the audio for. You may drag the marker (line) to a specific point in the timeline to listen to the audio from that point.

Initiating a recording no longer switches to another screen, instead the Start Recording button changes to the Stop button. The recordings that have been saved, are listed in the sidebar to the left. The keyboard shortcuts in the new app remain identical to the ones in the old version, use Ctrl + R to start recording, Escape to stop it, and Space to pause or play the audio.Sound Recorder’s side panel has an option to import an existing audio file and edit it.

While Voice Recorder can save files in the M4A format, the new Sound Recorder supports M4A, MP3, WMA, FLAC, and WAV audio formats. You can set the audio quality to auto, the best quality (large file size), high quality (the default setting), or medium quality (small file size), in the app’s Settings.

The Mark button, in the bottom right corner of Sound Recorder’s window, can be used to mark two places in the timeline. The markers can be accessed from the three-dot menu, it also has an option to control the playback speed. You can set it to run at 0.25x, 0.5x, 1x, 1.5x, 2x or 4x speed. 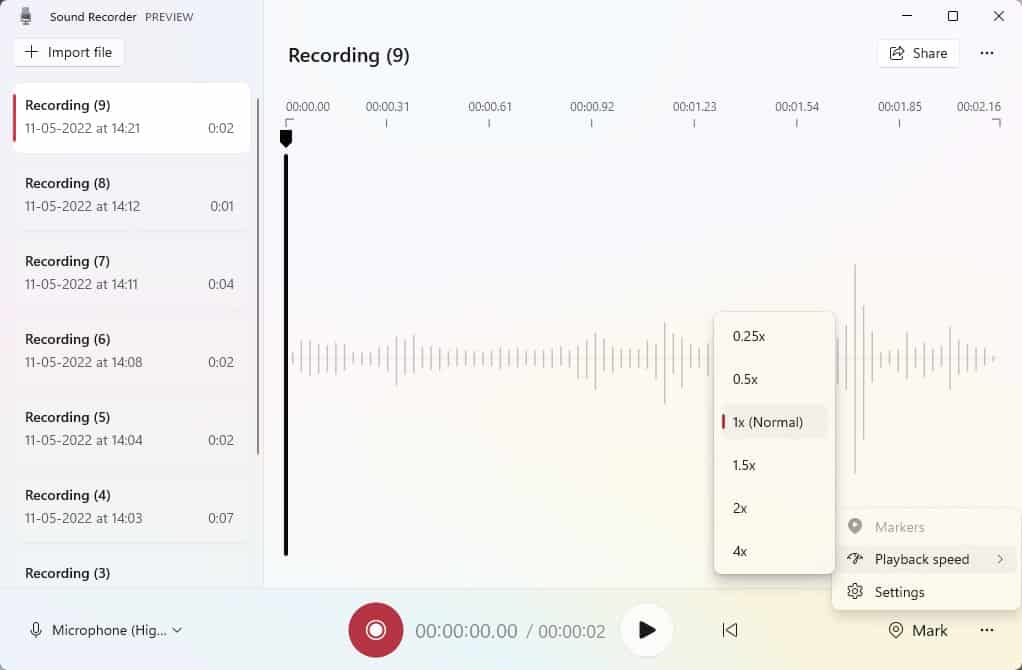 Moving to the bottom left corner, the button here can be used to change the Recording Device. If you have a laptop and a headset, and you want to use the microphone from one of the two sources to capture the audio, you can set it from this menu. 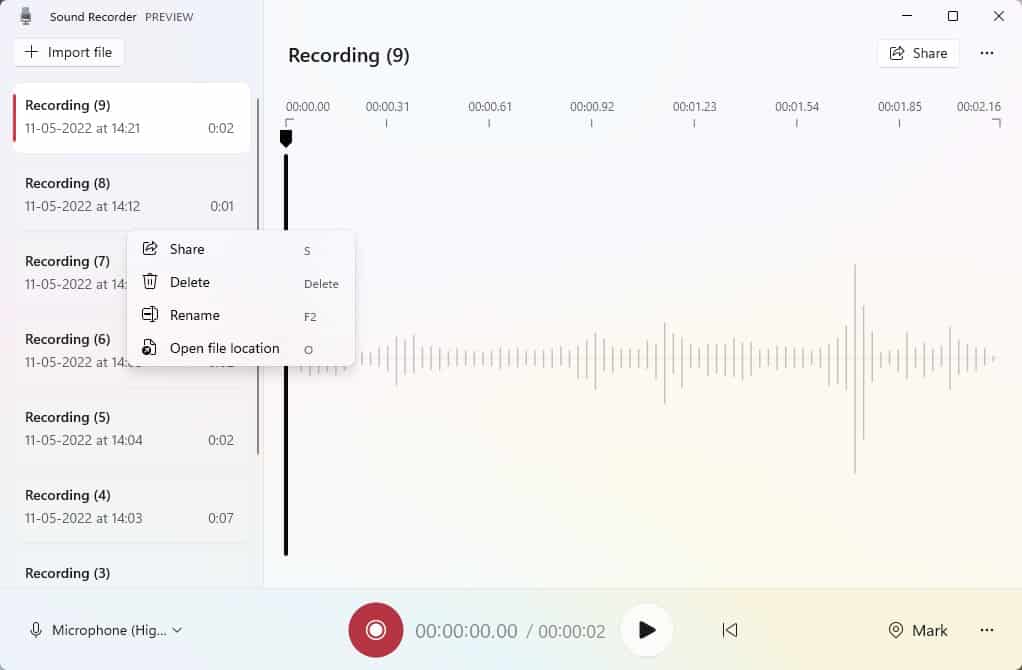 The options to share the recorded audio, and to rename it, are located in the top right corner of the program’s interface. You can also right-click on the items in the sidebar to access these options. The app has an optional Dark Theme that you can toggle from the Settings, or set it to follow the system’s theme setting to automatically shift between the Light and Dark modes.

Microsoft has redesigned other classic apps including Paint, Notepad, Media Player, etc., and they have been pretty good. The Redmond company is also expected to roll out a new web-based app called One Outlook, in the coming weeks. A leaked version of the app has been making the rounds on the internet, though it cannot be used with personal accounts, i.e. you need to log in with a work or education account. Replacing the built-in Mail app in Windows with a progressive web app (PWA) seems like a controversial idea, but let’s wait for the official roll out to begin before jumping to conclusions.

Thank you for being a Ghacks reader. The post Microsoft releases a new Sound Recorder app for Windows 11 Insiders appeared first on gHacks Technology News.