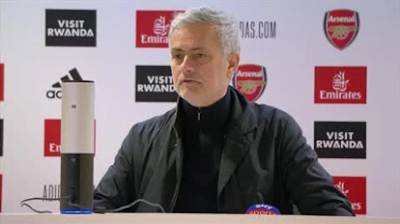 AS Roma manager, Jose Mourinho, has stayed away from confirming his interest in signing Manchester United midfielder, Nemanja Matic, this summer.

Mourinho also admitted that Matic is a fantastic player who ‘has his trust’ and they won together during their time at Man United.

Recall that Matic declined to trigger a one-year contract extension to stay at Old Trafford until 2023.

He has since confirmed that he will leave the Red Devils when his current deal expires at the end of the season.

Reports had earlier emerged that Mourinho could sign Matic on a free transfer this summer.

Mourinho has signed Matic twice previously – bringing him back to Chelsea from Benfica in 2014 before reuniting at Man United in 2017.

Asked if Matic might be joining him in Rome, Mourinho told Sky Sports: “I never like to speak about players. I don’t think it’s good for me, the club, or the player.

“Everyone knows my relationship with Nemanja. He’s one of the guys with my trust. We won together, we fought together – in United too.

“He’s a fantastic player, but that’s a kind of answer that is not good for me or for the player.”