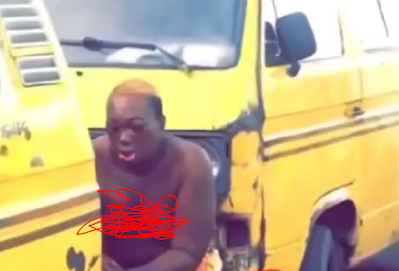 An unidentified man who is believed to be a crossdresser has been beaten up and stripped in Lagos.

A number of videos surfaced on social media on Thursday showing a male pedestrian standing in the public with only a pant on as a crowd of fascinated onlookers watched.

In the now-viral videos, the man could be seen at a motor park wearing makeup on his face which appeared to have been swollen.

This was just as transport workers could be heard recounting the attack and stripping.

There were also claims he was assaulted by “area boys” who might have found his visibly feminine features “irritating”.

The attack comes a few weeks after the House of Representatives considered a bill seeking to prohibit cross-dressing.

The proposed legislation, which sought to amend the Same-Sex Marriage (Prohibition) Act 2013, passed its first reading in the lower legislative chamber on April 5.

The bill is sponsored by Muda Lawal, a lawmaker representing Toro federal constituency of Bauchi state.

It proposed to add two new sub-clauses to section 4 of the existing act.

If passed into law, the likes of Bobrisky, whose real name is Idris Okuneye, James Brown, and Denrele Edun may face up to six months in jail if they continue with their current practice.