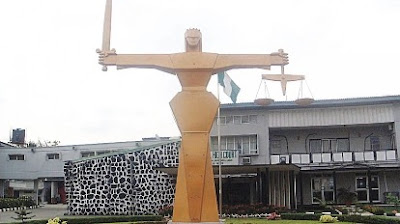 A Federal High Court sitting in Enugu State, presided over by Hon Justice F.O.G Ogunbanjo has fixed May 12, 2022, for hearing the case instituted by the father of a late law student of Nnamdi Azikiwe student, who was allegedly extra-judicially killed by the police.

The 27-year-old, 500-level law student of Nnamdi Azikiwe University, Awka, Augustine Ugwu, was allegedly murdered by an officer of the Nigeria Police Force at Nsukka, in Enugu State.

The deceased was said to have gone to a beer parlour at Odobido in Nsukka council area with his friend (name withheld) where he was trailed by a local security outfit constituted by the late chairman of the Nsukka Local govertnment Area, Patrick Omeje.

It was gathered that the deceased had just arrived the beer parlour and ordered for a drink when members of the local security outfit (Civilian Anti-cult), arrested him and after beating him, handed him over to the officer in charge of Anti-cult in Nsukka, Ferdinand Nnamdi Ochi, who allegedly murdered him over a yet-to-be-identified issue.

After a long wait for the alleged killer cop to face criminal trial, the family has now approached a Federal High Court in Enugu seeking redress.

The father of the deceased, Mr. Andy Samuel Ugwu, instituted the case.

It is a fundamental rights case against the Inspector General of police and 5 others.

The applicant is seeking order of court on the defendants to pay the sum of N500,000,000 (Five hundred million naira) as damages for the alleged extra-judicial killing of his son.

It was learnt that the process has been served on all the respondents except the 4th respondent, who seems to be evading service.

The case came up in the court on 27th April, 2022 and the court adjourned the matter to 12th May 2022, for hearing and ordered hearing notice to be served on the respondents.