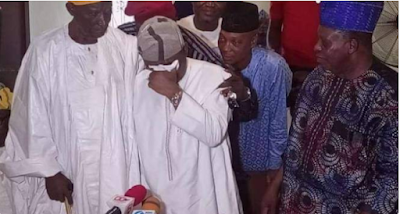 Solomon Adeola, senator representing Lagos west, broke down in tears when he was presented with the nomination form of the All Progressives Congress (APC) to contest for Ogun west senatorial seat.

Adeola, also known as Yayi, could not hide his emotions as he wept while acknowledging receipt of the form.

The expression of interest and nomination forms were allegedly purchased by some leaders of the All Progressives Congress (APC) from Yewa under the auspices of West to West for Dapo Abiodun (W2W4DA).

The forms were presented to him at his country home in Ilaro.

According to the group, 71 of them pooled their resources to raise the N20 million for the nomination form.

The senator, who said he was overwhelmed by the gesture, expressed his appreciation and reiterated his commitment to getting Ogun west to greater heights.

Adeola said he decided to switch his membership from the Lagos chapter of the APC to Ogun state “to add value to his senatorial district”.

“In all my years of contesting elections for close to 20 years now, this is the first time I’m getting this kind of gesture, and to say the little, I’m very happy,” Adeola said.

“It is worthy to note that 71 people brought their hard-earned money together from about 50k from the least person, to N3m from the biggest donor, to surprise the Senator with the gesture.

“It’s a new dawn in Ogun west, like we say it’s a new order for a new glory.”

He also pledged his “unwavering support” to the reelection bid of Abiodun.