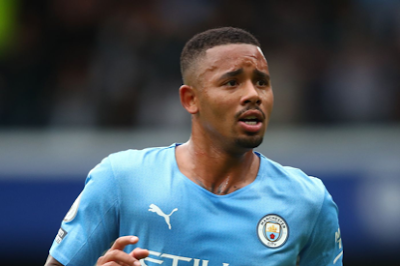 Manchester City has set a price tag for their striker, Gabriel Jesus, amid interest from Arsenal.

Jesus has drawn interest from Arsenal in the past few days.

Arsenal manager, Mikel Arteta, is keen to work with Jesus as he looks to bolster his attack line following the departure of Pierre-Emerick Aubameyang.

Arteta has been an admirer of Jesus ever since working with him at the Etihad as Man City’s assistant coach.

Arsenal plan to invest heavily in a striker this summer, with the possibility of Alexandre Lacazette and Eddie Nketiah both leaving Emirates at the end of their contracts.

According to the Mirror, Man City are demanding at least £40 million for Jesus, with manager Pep Guardiola open to allowing the Brazilian to leave the club this summer.

Meanwhile, Man City plan on signing Erling Haaland from Dortmund for a fee of around £62m and that will push Jesus further into the fringes.

The Citizens will utilise the cash from the sale of Jesus to spend on Haaland.