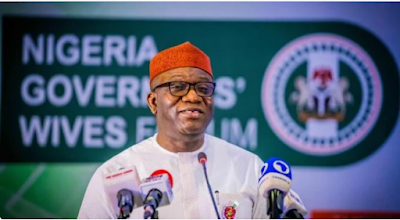 Ekiti State Governor, Olukayode Fayemi, is set to declare for the 2023 Presidency on Wednesday, May 4, 2022, in Ado-Ekiti.

The state Commissioner for Finance and Economic Development, Hon. Akin Oyebode suggested this in a video tweet via his Twitter handle on Tuesday.

In the one-minute video tweeted by Oyebode, Fayemi unveiled his Nigeria agenda ahead of the 2023 general election.

He said, “the Nigeria of our dream is possible, a Nigeria that is the pride and joy of all, among others.”

With his 2023 presidential intentions now confirmed, the list of APC presidential aspirants in Fayemi’s southwest has been further swelled.

Both Osinbajo and Tinubu will now slug it out with Fayemi for the APC ticket between May 30 and June 1, when the ruling party will have its National Convention to pick candidates for the 2023 elections.