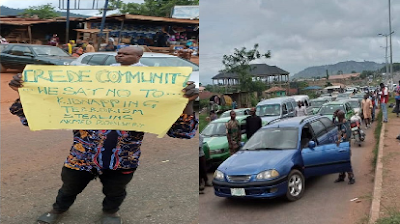 Commuters travelling along Ado-Ikere- Akure road in Ekiti State, had a hectic day on Monday, as residents blocked the road to protest incessant kidnapping and robbery in that section of the capital city.

The protesters, who were from Irede community, Ajebandele area of the capital city, were protesting the alleged kidnapping of a Pastor, Julius Osunluyi, in the area, on Sunday evening, by suspected abductors.

The placard-carrying protesters blocked the major highway, thereby causing chaotic traffic jams in the axis for over four hours.

Commuters coming into Ado Ekiti from either Akure or Ikere and those travelling out of the metropolis were trapped for several hours with their vehicles stagnant due to the blockade by visibly angered protesters.

The Hausa people resident in the Muslim dominated Shasha area of Ikere Ekiti had to disembark from their cars and motorbikes and trekked over two kilometres to get to the praying grounds at Ajilosun.

Gun-wielding men, suspected to be kidnappers, were said to have besieged the Pastor’s church, Sunday evening and abducted him.

Addressing the people, one of the protesters, who identified himself as Ajayi Olayiwola, said the protest became imperative to compel the Police Division at Ologede Police station to provide the necessary security for the populace in the area.

Olayiwola accused the policemen operating in the area of laxity, saying several entreaties made to them to extend patrol to the area were rebuffed for no stated reason.

He added that over five cases of Kidnapping had been witnessed in the area in the last three months, describing the situation as terrifying and disturbing.

He said some of the kidnap and robbery cases witnessed in the area could have been averted if the police had extended their patrol to the axis.

“The state of insecurity in Irede community area is alarming as we can no longer sleep with our two eyes closed.

“This protest is to call the attention of appropriate authorities to find a solution to the ugly development, particularly the police.

“This disruption of free flow of vehicles is to send a signal to the public about our plight and for the Police Command to do the right thing”.

He said the Police Commissioner, Mr Moronkeji Adesina, had ordered intensive patrol day and night in the area and across Ekiti to stem the tides of criminality.

“The Police in Ekiti are not taking anything to chance. We are doing our best to tackle crime and criminality.

“The CP had ordered our patrol teams and a team of detectives to up their games and ensure that those perpetrating crimes are brought to book.

“If you notice, our night patrol had increased, and the CP had urged Rapid Response Squad to trail the alleged kidnappers and bring the man out from their den hale and hearty”, Abutu said.