Rap Radar boss and revered hip-hop journalist Elliott Wilson made no bones about his feelings when it comes to Future in a new GQ cover story. “Future is the best rapper alive,” he proclaimed about the rapper, who he said has no peers when it comes to being as “consistently excellent, or as influential, for as long as he has… He invented his own sound, which has since become the dominant style in rap. He has delivered hit after hit after hit. And he’s done it all on his own terms.”

As proof he cites the rapper’s upcoming, as-yet-untitled 9th solo album, which Future promised is his most vulnerable and open effort to date.

“I’m putting myself out there,” said Future of the collection that features collabs with Ye, Drake and Gunna. “Sharing my lifestyle with the world. Sharing my pain with the world. Sharing my ups, sharing my downs with the entire universe. I believe in the energy of the universe and manifestation. That’s why I’m giving myself, because I’m willing to correct myself. I don’t want to just… be wrong. I’m willing to give you all of me, so you can tell me how to build on me, and make me a better me.”

Wilson set up the chat by reviving the perennial, “Who is the greatest rapper alive?” debate. And after offering up the usual list of names that came up during a Spotify RapCaviar Twitter poll (Drake, J. Cole, Kendrick Lamar, Nicki Minaj), he pivoted to a 2021 Drink Champs interview in which Ye (formerly known as Kanye West) posited that Nayvadius DeMun Wilburn is the most influential artists of the past decade.

How did Future take that news? In stride, of course. “I got here through music,” he told Wilson. “I didn’t get here for having the best interviews. Other dudes in the world can have the best speech. They can do this in one take and it’d be perfect. I just found a way to make art with words. And through that, that’s just how I live.”

No less an authority than Drake — who roped Future in last year for his first-ever No. 1 on the Billboard Hot 100 on Drizzy’s “Way 2 Sexy” — co-signs his hustle, telling Wilson that Future is “an absolutely relentless, spontaneous workhorse… You take his free-flowing genius and you mix it with my level of understanding and planning and — records, albums, singles—we can pretty much create anything together.”

As proof, Wilson offered a breakdown of what he dubs Future’s singular sensation: the ability to use his often-digitally-enhanced voice to contort words and syllables into heretofore unknown shapes on his 8 solo albums, 19 solo mixtapes, 2 EPs and the Superfly soundtrack that have boosted his numbers to more than 30 billions streams to date. “His own innovative take on the concept of ‘bars’ — but his verses are uniquely versatile: He can traipse the full spectrum of human emotion, from lovingly tender to cruelly toxic to heart-wrenching to turned up to 11, all within the space of an eight count,” Wilson wrote.

Though Atlanta is jam-packed with contenders to the throne, Wilson unequivocally dubs Future, 38, the “King of Atlanta,” running through his early years hanging with the city’s murderer’s row production crew, the Dungeon Family, his undeniable run of mixtapes that club DJs had to memorize to keep the crowd moving and the early 2022 New York sessions for his upcoming album.

After taking his longest break to date — his High Off Life album came out in May 2020 — Future said he’s “genuinely happy with life” now, both on and off the stage after what Wilson said opined were back-to-back albums that felt like a descent back to Earth from former lofty musical highs. “There was a time where I was only happy when I was on the stage, and in the studio. Like it was my escape,” Future said. 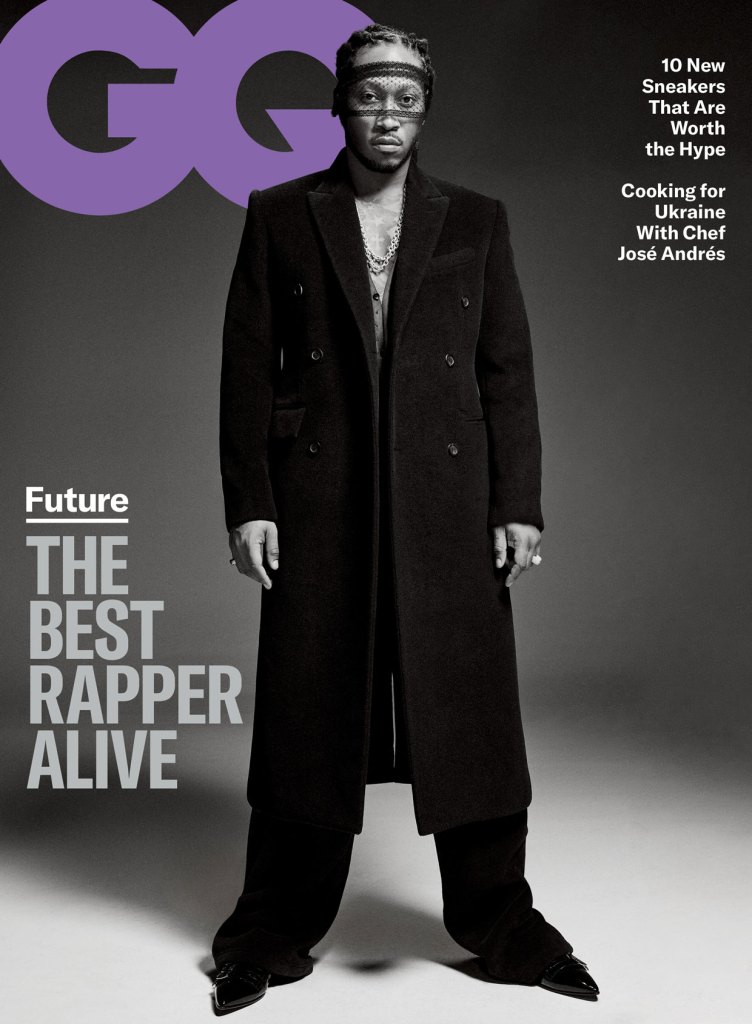 Future on the cover of GQ’s May Issue.

Future seems to have gotten the message, as he promised that he poured his entire heart and soul into the album slated for release on April 29. “Putting this project together is just people understanding that I love hard,” he said of the collection, which Wilson described as relying less on hooks and more on lyrical aggression. “Probably love the hardest. I wanted to showcase my skills as far as melodies and topics and being vulnerable,” Future said.

Later in the chat, Wilson delved into Future and Ye’s long-standing friendship and creative partnership, which has stretched from Ye flying Future to Paris in 2011 to work on music to tapping Future as an executive producer on this year’s Donda 2 album. “When he said that, I understood why he called me to Paris, even though I didn’t understand it at that time,” Future said of West’s high praise on Drink Champs. “I understood why we had certain conversations. I understood him being a part of [Future’s 2014 single] ‘I Won.’ Even him having me write on certain [Kanye] albums that people don’t even understand I wrote on.”

Their hang ends with Future recording a track from scratch while sitting just a few feet from Wilson outside the vocal booth, next to his engineer, just like he’s done since his mega-platinum 2017 “Mask Off” smash. In less than 20 minutes he’s got a “pretty strong” demo and some thoughts on how and why he does what he does.

“I do art, man. It doesn’t lose value. It doesn’t depreciate. My passion is always going to overcome anything,” Future said. “This project is about sometimes having an open heart, handling everybody with open arms, man. You are going to get the bad end of the situation. Sometimes people out there try to make you seem like the suspect. Really, you are the victim. But at the same time, I’ve always been put on a pedestal, that either I can’t complain about certain s–t, I can’t speak on certain s–t… I turn pain into diamonds… I do that… with my eyes closed.”